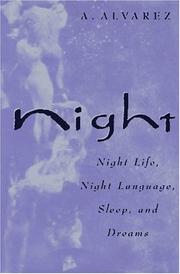 Although pleasing to read and informative, this exploration of the elements of night ultimately lacks cohesion. London-based Alvarez (The Savage God, not reviewed, etc.) sets out to investigate the sinister power that he claims darkness has always held for human beings. He looks at myths and religions in which ``godhead equals light equals order; chaos equals darkness equals fear.'' After giving a history of human attempts to banish the darkness, from fire to electricity, Alvarez jumps to discussions of his own childhood fear of the dark, the history of sleep research and dream analysis, crime, and night life. The section on sleep research—ranging from the definition of consciousness to the discovery of REM sleep—is clear and understandable and he makes intriguing use of literature in relation to scientific conclusions about sleep. Unfortunately, it's not enough to bind the various elements of the narrative together. Each section, from the self-analytical explanation of a childhood phobia to the research into nighttime crime in modern cities, stands as a separate entity, and the text skips from one concept to another with no warning or reason. The longest section deals with the dual sciences of sleep research and dream analysis and their effects on writers and writing. It is here that Alvarez adds something new to this subject, by applying the knowledge gained from these disciplines to poets as diverse as Coleridge, who suffered from nightmares, and the Surrealists, for whom dreams were a model for creative expression. Only in the last sentence of the book does Alvarez overtly address the concept of death, an idea that is always just under the surface of his text, but it appears too suddenly and is left hanging, unexplored. Like the dreams that are dissected and explained at length, the connections here are just too unclear. (Illustrations, not seen)