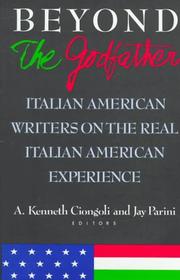 A wide-ranging collection of essays that attempts to define ``the Italian American experience,'' in reaction to the ``too successful'' Godfather films, which ``have held up an image that has obliterated the reality.'' Divided into three sections encompassing personal memoir, Italian-American literature, and ``identity politics,'' the anthology is put together by novelist and critic Parini (Benjamin's Crossing, p. 410, etc.) and Ciongoli, a neurologist and president of the National Italian American Foundation. Several of the contributors are familiar names, such as Gay Talese, whose ``Origins of a Nonfiction Writer'' looks at the fascinating precincts of his mother's dress shop, where what he ``heard and witnessed . . . was much more interesting and educational than what [he] learned from the black-robed censors'' in parochial school. Dana Gioia chips in with an examination of Italian-American poetry, while Fred GardaphÇ looks at his ``life's reading'' of such writers as Pietro di Donato, John Fante, and Mario Puzo. Edvige Giunta echoes GardaphÇ in her lengthy paean to Tina De Rosa's Paper Fish, ``a landmark in Italian American literature.'' In another arena, Richard Gambino posits that ``wildly . . . inauthentic myths . . . have come to serve as a substitute among Italian Americans for an authentic, developed identity.'' Linda Hutcheon writes of ``crypto- Italians'' such as herself, Cathy Davidson, Sandra Gilbert, and Marianna Torgovnick, who, through marriage, become ``a silenced marker of Italian heritage.'' Parini describes his quest to learn if his ``emotional connections'' to the Old Country were ``real, or just a piece of trumped-up sentimentality.'' Occasionally, the personal reflections become intensely uncomfortable, as in Louise DeSalvo's recollections of vicious fights between her mother and her step-grandmother. Informative and engaging, but perhaps too evenhanded. Too many of the essays lack the passion and the lusty good humor that are trademarks of Italian-American culture.