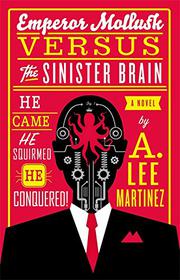 EMPEROR MOLLUSK VERSUS THE SINISTER BRAIN

by A. Lee Martinez

More fantasy humor from the author of Chasing the Moon (2011, etc.).

Lord Mollusk, a small, very smart, squid-like renegade Neptunon, grew bored with being Emperor of the solar system—he's enslaved the Earth for its own good, you see, by putting chemicals in the water, and defeated everybody else that annoyed him. He gets around using various hi-tech exoskeletons and uses a flying saucer—what else?—for transport. His only companion is his pet, Snarg, an indestructible, intensely loyal ultrapede. Retirement, however, is dull. Humans love him. He's solved the energy crisis and numerous other problems. Inventing dangerous super-weapons soon palled. He's not really that evil, so his options are limited. He can't even defeat himself—an attack by his own clone produced little stimulation. So when Zala, a reptilian Venusian warrior, arrives to arrest him for war crimes, he conscripts her as a bodyguard. Zala, however, announces a new threat to his life. Lord Mollusk ponders the list of possible offenders. Saturnites? Mercurials? He's defeated them all. The invincible assassins of a celebrated secret death cult? Well, possibly—but then, wouldn't he already be dead? (Those guys are good.) What about an ambitious newcomer, a brilliant, disembodied megalomaniac who's stolen Mollusk's own super-science? Interesting. How do you defeat an opponent that's built a machine to receive messages from the future telling him how to defeat you? Bland, and that's what this is, can be amusing but not funny—compare, for instance, the U.S. and U.K. versions of The Office. To elicit convulsive laughter requires a certain amount of acid, an admixture of pain, a willingness to give offense to make a point. Martinez doesn't have that sort of comedy killer instinct. Some chuckles, no guffaws.