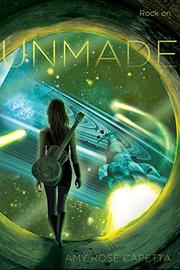 Following Entangled (2013), rock star–turned–would-be savior Cade makes a stand to save humanity from the Unmakers.

Using her psychic musical abilities, Cade discovers the location of her mother and, with her plucky band of friends, crewmates and living spaceship, succeeds in reaching her—though her mother’s badly afflicted by the crippling catatonia of spacesick. The mother-daughter reunion is interrupted by an Unmakers’ attack. Cade and company rescue as many as they can before learning just how devastating the attack really was. Prompted by the need to take care of the survivors, Cade decides the time is right to unite the fragments of humanity scattered across the universe and sets off to find them. While Cade pulls together her fleet and defends it, she uncovers crucial information about her musically entangled connection to the universe, spacesick, the nature of Unmakers and her own friends. Cade and Rennik’s attraction to each other wars with their priorities, creating believable romantic tension. The action consistently builds: in stakes, in tension and especially in personal costs to characters. While unanswered worldbuilding questions occasionally stress suspension of disbelief, complicated twists and swift pacing keep readers moving forward. The ending completes the major story arc while still leaving a few (mostly logistical) questions about what’s next for the remainders of humanity.

Fast and intense, both in action and emotions—readers who liked Entangledwill love its sequel.