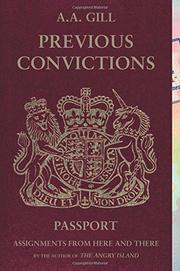 Assignments from Here and There

Vanity Fair contributing editor Gill (The Angry Island: Hunting the English, 2007, etc.) returns with another stellar collection of dispatches from across the globe.

As he noted in A.A. Gill is Away (2005), when on assignment the author follows a few hard and fast rules: Don’t conduct research before traveling; don’t stay too long; don’t take notes. Fortunately for readers, Gill is blessed with a remarkable memory and a consistently engaging style of equal parts acid wit and tender poignancy. His latest collection is divided into two sections. The first includes travel writing about his native United Kingdom and other assorted critical essays. The highlight of this section is without a doubt “Golf,” the author’s tirade against the staid sport (“Golf is the standard bearer and pimp for the worst types of gratuitously wasteful capitalism and conspicuous consumption”) and his attempt to understand its appeal. Gill also offers pointed commentary on dogs, hunting, drama, photographer Henri Cartier-Bresson (who he considers an “unequivocal, unarguable” genius) and the pitfalls of life-drawing class (“His haggis stomach rested on his thighs. Underneath drooped a penis of supreme ugliness, a Quasimodo todger, bent double, shouldering the weight of a voluminous, rucksack scrotum”). The second half of the book chronicles his far-flung travels, from the crushing poverty of Haiti to the “feathers and buttocks, the pantomime and the pumping rhythm” of Brazil. Gill also ponders his first trip into the South African bush country; the “inversion of noise, the ghost of sound” he finds in freezing Greenland; refugees in Sudan and Pakistan (“they have that faraway, defeated, listless look of the universal brotherhood of refugees, people tossed out by events”); the peculiar exercise regimens of Manhattanites; the buff, oiled-up homosexual haven of Mykonos (for the record, the author is straight); and the mechanical glitz of Las Vegas, “where irony just curls up and dies.”

Gill is that rare critic who actually has something relevant and profound to say about every place he visits. Highly recommended.