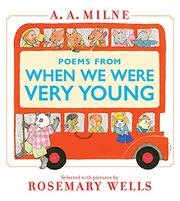 POEMS FROM WHEN WE WERE VERY YOUNG

Having put her own spin on traditional nursery rhymes in My Very First Mother Goose (1986) and Here Comes Mother Goose (1999), both edited by Iona Opie, Wells now interprets some of Milne’s children’s verse.

Where the original title had 44 poems, some confined to a page and others extending to a handful, with Ernest Shepard’s illustrations acting mostly as decoration, Wells here presents 13, many sprawling over several pages and accompanied by bright, busy illustrations that turn each one into a narrative. When James James Morrison Morrison Weatherby George Dupree’s mother goes “down to the edge of the town” without him in “Disobedience,” she hops into a black London cab driven by a rabbit, stops to make a call from a red phone box, and comes home in a different cab (driven by a cat) with a white terrier puppy for her son. Meanwhile, wee James telephones some nine people, including the royal family, with Wells’ interpolated dialogue presented in speech balloons. There’s so much side business the propulsive silliness of the original rhyme gets lost. Shorter poems, such as “Independence” and “Happiness” (both of which involve independent-thinking cat children), fare better, and sequential illustrations for “The King’s Breakfast” work well to convey the many back-and-forths endured by the Dairymaid. Most humans present White, though there are characters of color (including, a bit oddly, Christopher Robin).