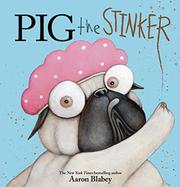 From the Pig the Pug series

Pig loves things that stink…including himself.

“Pig liked to get dirty. / He frankly was RANK. / His paws could be frightful. / His fur often stank.” Pig rolls in garbage and spoiled milk; he even plays with poo! He’s not offended by smells—not even by his wiener-dog buddy’s butt! Calls for bathtime make him run, and he’s very good at escaping, evading, and hiding. He sneaks away and jams a rubber-bone toy up the bathtub spigot. Then, being the nasty scamp that he is, he boogies with glee right in the tub, taunting his owner—until the plumbing explodes, bonking him in the nose with the faucet. From then on he doesn’t balk at bathtime…but that doesn’t change the fact that he often stinks to high heaven. Pig returns from his native Australia (where the book was titled Pig the Grub) to teach another lesson by setting a bad example. Blabey’s gleefully rancid creation scampers across the pages covered in (and liberally spreading) green and brown goo, and his pong is as visible as his owner’s face is not. With his bulging eyes and general nastiness, Pig is definitely an acquired taste; that this is his fifth outing is ample proof that many have done so.

Those who have enjoyed Pig’s other adventures in badness will likely love this one, and the obviously frequent mentions of things potty-related will recruit new fans.