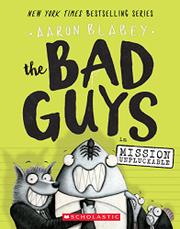 THE BAD GUYS IN MISSION UNPLUCKABLE

From the Bad Guys series, volume 2

The foursome of reformed villains returns with a new mission and new team member in a continued effort to repair their reputations in Blabey's (The Bad Guys, 2017) rollicking sequel.

This second installment opens with our would-be heroes, Mr. Wolf, Mr. Snake, Mr. Shark, and Mr. Piranha, fresh from their bold liberation of the local pound, finding that the media is not spinning in their favor. Accused of terrorizing rather than rescuing, the group (at least Mr. Wolf) refuses to admit defeat—"We're the GOOD GUYS here!"—and begins planning a new mission to free innocent chickens from their deplorable confinement in the Sunnyside Chicken Farm. But if the team can't work together—something all the more difficult with the team a little panicked by the addition of Legs (a friendly, tech-genius tarantula) and one of the group suspiciously excited to greet the chickens—a rescue mission may be all but impossible. Despite some language devaluing of mental diversity (“freak out,” “loco,” etc.) that may turn some readers off, Blabey once again deploys moral ambiguity to overall success, challenging fear as a justification for prejudice and mistakes as reasons to give up. The narrative has lost no comic momentum from first to second book, juxtaposing classic riffs on Mission Impossible and new visual gags unique to these delightfully wry characters.

Another uproarious romp that explores what it is to be good as well as do good.