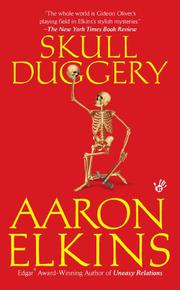 While her relatives are off having surgery and getting divorced, the Skeleton Detective’s wife Julie has been asked to fill in at Hacienda Encantada, the family resort in sleepy Teotitlán del Valle in Mexico. There’s nothing much for Gideon to do until rising politico Flaviano Sandoval, who’s reluctantly serving as police chief while awaiting his turn at higher office, invites him to examine the mummified remains of an unsavory drifter who called himself Manuel Garcia, and then the bones of a long-dead little girl who’s never been identified. Naturally, Gideon’s theory about what happened to a missing .32 slug in the drifter’s corpse turns the verdict of the local medico legiste on its head. Meanwhile, Julie’s made some surprising and unwelcome discoveries about Blaze Tendler, the mother of Julie’s cousin Annie. Although everyone knows that Blaze ran off years ago with her lover Manolo, who paused only long enough to relieve Blaze’s brother Jamie of $16,000 at the point of a gun, everyone turns out to be wrong. It’s only a matter of time before Gideon’s present-day corpse gets entangled in the branches of Julie’s family tree. But Gideon wears his customary learning so lightly that the forensics that establish that link are fascinating, and the mystery surrounding Hacienda Encantada grows more riveting with each new twist.

Gideon’s finest case in years proves that “Professor Oliver finds happiness in baffling the mind of the simple hardworking policeman”—and everyone else.