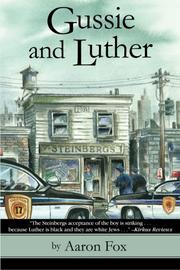 An aging storekeeper and her adopted prodigal son team up to sell cocaine out of an inner-city delicatessen.

Luther Hightree and Gussie Steinberg are the central characters in this often-meandering story of loyalty and love transcending race and time. Luther is only 6 when Gussie and her husband, Sol, take him into their home after his birth mother, a substance-abusing prostitute, freezes to death in an alley. The Steinbergs’ acceptance of the boy is striking in no small part because Luther is black and they are white Jews, whose grocery operates in a poor, black neighborhood. The Steinbergs raise Luther under the resentful eye of their biological son, Maxwell, who soon strikes out for Harvard, while Luther simply leaves home with no announcement. Fox takes his time setting up the plot, devoting almost half the book to back stories, some of them tangential. The action picks up only when Luther returns after the death of Sol and proposes that he and Gussie use the family store as a drug trafficking front. Things change overnight. The name of the business and the selection of goods moves upmarket, along with the clientele, as Luther’s white buyers from a previous life turn up in droves. The authorities take notice of the “strange partnership” that has materialized so abruptly, and the consequences are inevitable. While the novel strives to create empathy for its characters through their shared suffering, many will be put off by its glib portrayal of “ghetto” life and the heavy-handed usage of racial epithets. Passages are also marred by three-dollar words—“condign,” “poltroon,” “revenant,” “rictus,” “simulacrum” and so on—in a story that would be better served by plainer language.

A rambling effort to squeeze big themes inside a partners-in-crime frame.