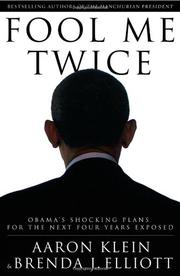 Obama's Shocking Plans for the Next Four Years Exposed

Move over, Mao Zedong. There’s a big, bad, black sheriff in town who’s coming to claim your title as Head Commie by overseeing “the progressive socialist takeover of our country.”

Note the “our country” bit. That’s because Barack Hussein Obama is, of course, from Kenya, or Indonesia or somewhere else. He’s not homegrown, like the much-adored George Bush, who provides the title of this screed through one memorable bout with the English language that Klein and Elliott (co-authors: The Manchurian President, 2010) seem to have drawn the wrong lessons from. The two serve up the stuff that, back in the olden days, you’d have to draw down from the weakest of shortwave-radio transmissions generated from some bunker out in the desert: Obama wants to open the Mexican border so that illegals can come streaming across and get documented so they can vote up in el Norte, which is just one of many nefarious tactics meant to ensure the dominance of the Democrats. Well, if Karl Rove had a game plan to ensure Republican rule for generations to come, it stands to reason that the Democratic Party might have one, too—save that the Dems, of course, will pull this off by weakening America’s military and sending the Army off to fight not al-Qaida but global warming. Gas guzzlers may now wish to tremble in terror, but it will do them no good: The military will be under U.N. command, anyway, thanks to Obama’s love of big one-world government. This book is alternately slipshod and stupid, citing the moral equivalent of Cliff’s Notes as an authority while ignoring some pretty heavy realities—such as the fact that the Mexican border is in fact more tightly controlled than under Bush and that the foreign-policy weakling Obama did actually end Osama bin Laden’s tenure on the planet.

A book that is comfortable to live in its own sphere of fact, evidenced by the mere datum that it takes Ann Coulter as a reputable source.