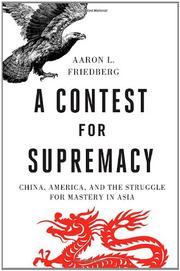 A CONTEST FOR SUPREMACY

China, America, and the Struggle for Mastery in Asia

A stern, carefully worded warning about why the United States should be more wary of China’s meteoric rise.

Friedberg (Politics and International Affairs/Princeton Univ.; In the Shadow of the Garrison State, 2000, etc.) is a forward thinker versed in the “fast-changing politics of post–Cold War Asia,” and he sets forth his argument, amplified from an essay he wrote for Commentary, that a growing Sino-American rivalry is forthcoming and inevitable. China’s economic strength in terms of opening markets has historically been encouraged by the West, and a stable, cooperative exchange of commercial interests has kept the U.S. and China on amicable footing since President Nixon and Henry Kissinger opened the diplomatic door in the early ’70s. The U.S. policy over the past 60 years has passed through phases of containment, alignment and the current uneasy mix of the two, “congagement,” which has been severely challenged since Tiananmen Square and China’s lobbing of dummy missile warheads into the Taiwan Straight during Taiwan’s first democratic presidential election of 1996. With its newfound economic muscle, China will most likely follow the historic precedent of previous hegemons in the throes of intense expansion—e.g., Britain, Germany, Japan—and seek to dominate “its neighbors, its regions, and, if it can, the world.” In a meticulously organized study that often repeats and summarizes its assertions in the fashion of a tutorial, Friedberg lays out the various ongoing arguments for containment or alignment, as well as what he extrapolates Chinese intentions to be—avoid confrontation, build comprehensive national power and advance incrementally. On the other hand, he writes, China is due for a similar bubble burst recently visited on other expanding nations, and he offers numerous intriguing scenarios. An important cry to heed: China’s peaceful rise cannot disguise its aim to become “world number one.”