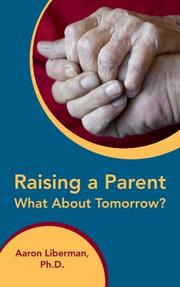 A collection of 60 recommendations for coping with the needs of an aging parent.

While Liberman (Health Management & Informatics/University of Central Florida; Learning to Code with ICD-9-CM for Health Information Management and Health Services Information, 2006) has a doctoral degree and an academic position, his book eschews scholarly references and research findings for a personal narrative. The result is a book that is intensely personal and sometimes moving, but limited in its applicability. A major limitation comes from Liberman’s characterization of his caretaking role; he repeatedly refers to “22 years” of responsibility for his mother, but the narrative indicates that she lived independently in California for 16 of those years, including 4 years when Liberman lived in Florida. It appears that Liberman’s mother physically shared a home with him and his family for less than a month, at which time her frequent demands and negativism prompted him to have her return to her apartment. The references to “raising” a parent are therefore misleading. Liberman offers recommendations likely to be helpful to individuals struggling with a parent’s increased need for help, but they will not necessarily apply to individuals involved in daily caretaking. Another limitation is that chapters are poorly organized, with limited thematic continuity; chapters five and six deal with death and estate management respectively, and chapter seven addresses when the elderly should stop driving. The tone of the narrative becomes defensive at points (particularly when addressing management of financial affairs), and this defensiveness is linked to one of the book’s greatest strengths—Liberman’s willingness to admit his frustrations and mistakes; in the preface, the author says, “I would like the reader to know, as I am sure you will easily recognize throughout the text, that we did not always do everything right.” His honest disclosure of his sometimes unsuccessful struggles will almost certainly resonate with others who are dealing with an aging parent or facing their own negative emotions and missteps. A timely, important topic viewed through an intensely personal lens that limits the work’s applicability.