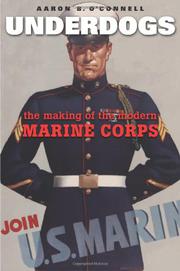 The Making of the Modern Marine Corps

How the Marine Corps became the country's preferred globe-spanning intervention force during the early years of the Cold War.

Unlike the other branches of the armed forces, writes O'Connell (History/U.S. Naval Academy), the Marines did not rush into nuclear technology after World War II. Instead, he argues, the Corps built on its combat record, especially in the Pacific island-hopping campaign, to re-orient itself as an elite, naval or helicopter-borne, quick-reaction force, able to provide various combinations of unit strength on very short notice. Using an equipment and technology budget line from the Navy, the Marines expanded in size and technical capability to meet this adopted objective. The real eye-opener here is O'Connell's account of the behind-the-scenes lobbying and PR work conducted by the Chowder Society, “an unofficial organization of…well-connected officers” dedicated to protecting the Corps from postwar defense reorganizations. According to the author, this went beyond lobbying and included spying, leaking classified documents and smearing opponents. The group made full use of the Marine’s press networks, building especially on the wartime centralization of news distribution. Headquarters had developed tactics for dealing with the press, such as preparing “Joe Blow” stories of hometown combat troops. O'Connell shows how Hollywood transformed the image of the Marines, who sustained a casualty rate double that of the Army, by crafting stories that depicted them as military heroes. Then, to support peacetime political combat, those stories were tweaked to portray them as gentle protectors of families and motherhood. The author contrasts the stories with the reality.

A powerful account of the relationship between fighting war and preserving peace, viewed through the lens of the stories that built support for both.