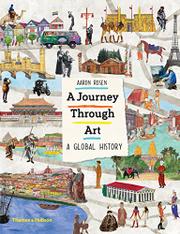 A JOURNEY THROUGH ART

Title notwithstanding, after a visit to the prehistoric petroglyphs at Nawarla Gabarnmung in northern Australia (and with a 19th-century stop at Haida Gwaii for a gander at Pacific Northwest Native woodcarving), Rosen focuses more on cities or large settlements and urban ways of life through the ages than on specific works or styles of art. His itinerary is determinedly “global,” though, covering every continent but Antarctica from 13th-century B.C.E. Thebes to art and architecture created for the 2016 Rio Olympics. Each stop along the way opens with an overview of the site and its distinctive character accompanied by a wide-angle picture painted by Dalzell and dotted with tiny clipped photos of statues or other figures. On the following spread further concise observations on customs and culture accompany three or four smaller (sometimes, alas, minuscule) photos of significant monuments, artifacts, or paintings with explanatory notes. Though the author hustles readers past the Rosetta Stone and Leonardo’s Vitruvian Man without benefit of visuals, a satiric Egyptian papyrus offers an eye-opening treat—and in more recent times he boosts the presence of women among his sparse tally of artists by, for instance, pairing works of Judith Leyster and Rembrandt, Mary Cassatt with Claude Monet.

Misleadingly titled but broader in scope and less Eurocentric than standard surveys.