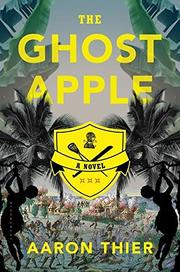 The tale of Tripoli College is told piecemeal, in an accretion of memos, newspaper excerpts, diary entries, historical accounts, emails—and slave narratives, old and new. The college, an institution of higher learning that hardly dares call itself elite or Ivy League, manages, in spite of a recession-gutted endowment, to subsist thanks to its robust athletic department and innovative proxy college on St. Renard in the Caribbean. St. Renard, island habitat of the medicinal (or poisonous?) “Ghost Apple” originally cultivated by its first indigenous population, the long extinct Carawak Indians, is still largely dependent on its sugar industry. In short, Tripoli, with its failing finances—the football team is losing steadily thanks to woefully inept kickers—is ripe for corporate takeover by the global snack food/pharma conglomerate Big Anna®. To gain more insight into Tripoli student life, William Brees, Tripoli’s 70-year-old dean of students, goes undercover to live in a dorm and party with a crew of slacker freshmen. He quickly develops a crush on Maggie Bell, an African-American student from a privileged background, whose emails to her twin brother, Chris, reveal that she has a crush on charismatic history professor John Kabaka. Disgusted with Tripoli’s craven acceptance of corporate governance—Big Anna®'s minions muzzle the student newspaper, squelch academic freedom and, in acts of political correctness carried to unimaginable extremes, perpetrate atrocities against a college benefactor descended from slaveholders—Kabaka flees to St. Renard to foment revolt. As Megan and professor Brees soon learn, while they spend an ill-advised semester on the pestilential isle, Big Anna® has, in the name of reducing its carbon footprint, abandoned mechanized forms of sugar production. This forces it to resort to the only other large-scale sugar growing and refining mechanism possible: slave labor. In arch language mirroring everything from annual report puffery to 17th-century castaway journals, Thier manages to lampoon corporate evil without ever underestimating or dismissing it.