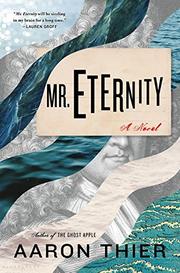 Thier (The Ghost Apple, 2014) sends Daniel Defoe, a 560-year-old Spaniard, wandering across centuries as the world wages wars, civilizations are raped, and human societies are swamped by global warming.

A simple fellow who tells folks that the secret to eternal life is not dying, Defoe lives as a mirror rather than a narrative-driving hero. All he desires in his millennial-long quest is to find his true love, Anna Gloria, again. In 1560, Defoe joins explorers guided by a Pirahao aboriginal girl, trapped as a colonial mayor’s mistress, into Amazon-like wilds in search of treasure. In 1750, he becomes Dr. Dan on Little Salt, a Caribbean island, where John Green, a mulatto intent on passing as white, lurks on a failed sugar plantation. In 2016, two young filmmakers, propelled by drugs and irony, set out to make a documentary about the ancient mariner. In 2200, Defoe becomes a guide to buried treasure, a roguish tale narrated in rambling Faulkner-ian exposition by a young fellow called Jam. In 2500, where once stood St. Louis, now land "hot enough to fry an ape," Defoe encounters Jasmine St. Roulette, daughter of the hereditary king and president of the Democratic Federation of Mississippi States. The tales explore the ugliness of slavery, the genocide of aboriginal peoples, and the ubiquity of greed. Throughout, Thier riffs on multiple themes: the evolution of history from fact to legend—"imagination and memory were all confounded one with the other"; how language constructs reality; and how, as the protagonists in our own stories, we "struggle with the meaning of story." With symbolism and analogy, surrealism and fantasy, Thier deftly reflects on and explores the human condition through "the lavender light and sweet scented dust of history."

Erudite. Imaginative. A work to be read slowly and savored.