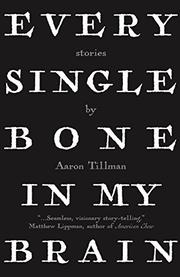 EVERY SINGLE BONE IN MY BRAIN

In this debut collection, the characters navigate careers, relationships, and religious angst in 14 short stories alternating between realism and whimsy.

Many of the author’s protagonists are entitled young men whose supposed problems overlay their privilege—or, in short bursts of magic realism, point to absurdities in modern life. In the title story (named after a Jack White lyric), the narrator can’t help but deliver electric shocks; does his condition make him a danger or a would-be superhero? He meets someone who’s willing to take a chance that his electricity might sometimes be healing rather than harmful. Two of the best tales, “Smiling” and “The B’Jesus,” similarly imagine guys isolated by difference: one whose inability to stop smiling loses him his girlfriend and his job; and another who has worn an old homunculus on his back since he “scared” it out of Great Aunt “Early” Earlene. Elsewhere, religion is the source of inner turmoil. In “The Great Salt Lake Desert,” Ian’s composure is imperiled after he loses his virginity to a lapsed Mormon and encounters the Sodom and Gomorrah story in a Gideon Bible. Likewise, in “Heeding Doctor Eisner,” the overall standout, the Nabokov-ian narrator, an adjunct sociology professor, is so rattled by a Hispanic “preacher” on a train that he enacts his own version of hellfire. Judaism is a recurring point of reference, often as a stricture to be transcended, as when the kids of “High Holy Days” find small, cheeky ways to defile the synagogue—a reminder that “holiness wasn’t only in the sanctuary.” Premature births, mental illness, new media, and freeloading are central concerns in other tales in this skilled collection (most of the stories were previously published in literary magazines). “Vacancy,” about a teenager who unwittingly inspires a punk band’s new song, is the one piece that doesn’t seem to fit. Tillman (English, Newbury College) writes a terrific first line (“I was ten years old when the neighbors called the police to extinguish the Holy Sock Fire my mother had started in the parking lot of our building”). But his sometimes-inconclusive endings are a mite less successful.