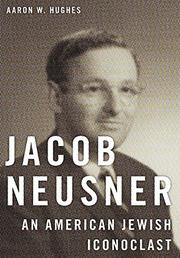 The life story of the father of modern Jewish studies.

In this respectfully balanced biography, Hughes (Jewish Studies/Univ. of Rochester) explores the life of Jacob Neusner (b. 1932), a renowned scholar of Judaism and a controversial figure in the American academy. Born in 1932 to a Reform Jewish family in Connecticut, Neusner soon showed significant academic promise, which would result in his education at Harvard, the Jewish Theological Seminary, Oxford, and Yale. Hughes goes to great lengths to set the stage for Neusner’s entry into post-biblical Jewish scholarship, explaining that he was among the first to enter the field from a critical, secular standpoint as opposed to rabbinic or yeshiva routes. As such, he had to struggle for acceptance and basically created the field of Judaic studies that exists today. Neusner’s academic career took him to a variety of universities, and in each place, he caused substantial waves through his groundbreaking views on Jewish studies and his own personality, which Hughes describes as “colorful, mercurial, controversial, [and] often bordering on the outrageous.” From the University of Wisconsin, Milwaukee, Neusner moved on to Dartmouth and then to Brown, where his interpersonal conflicts with administrators, faculty, and students reached a fevered pitch, causing his early retirement. He completed his career with appointments at the University of South Florida and Bard. Hughes also covers Neusner’s forays into conservative politics. The author presents an interesting and widely accessible life story that should appeal to readers interested in American Judaism, Jewish studies, or the academy itself. However, he provides only scant details of Neusner’s actual contributions to his chosen field. “It is unfortunate that when Neusner is remembered,” writes Hughes, “it is primarily because of his notoriously difficult personality, and not necessarily on account of his massively important contributions to the study of rabbinics and religious studies.”

Hughes offers a worthwhile study of Neusner’s life but little about the substance of his work.