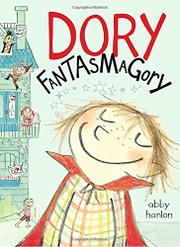 From the Dory Fantasmagory series, volume 1

With words, pictures and pictures with words, 6-year-old Dory, called Rascal, recounts how she finally gets her older brother and sister to play with her.

Rascal’s siblings complain that she’s always pestering them. She acts like a baby, she asks weird questions, and she chatters endlessly with her imaginary monster friend. So they tell her a kidnapping witch, Mrs. Gobble Gracker, is looking for her. In her efforts to avoid capture, Rascal becomes a dog. As a “dog,” she’s invisible to the little-girl–stealer but appealing to her older brother, who, it turns out, always wanted to have a dog. She maintains her dogginess all the way through a doctor’s checkup until a surprise vaccination spurs her to speech and retaliation. Rascal and her invented fairy godmother, Mr. Nuggy (he doesn’t look much like a fairy godmother), use the ensuing timeout to concoct poison soup for the witch. Eventually, the witch is vanquished and order more or less restored. Redeemed in the eyes of her siblings because she’s brave enough to retrieve a bouncy ball from the toilet as well as wildly imaginative, Rascal finally gets her wish. Often just on the edge of out of control, this inventive child is irresistible and her voice, convincing. Childlike drawings, often embellished with hand-lettered narrative or speech bubbles, of round-headed humans, Sendak-ian monsters and a snaggle-toothed witch add to the humor.

Charming, funny and true to life.