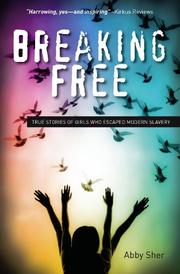 The harrowing real-life stories of three girls who turned their experiences as sex-trafficked children into a fight to destroy the practice.

This set of brief biographies opens with 9-year-old Somaly Mam in Cambodia around 1979. Sold to a brothel by her ostensible caretaker, Somaly experiences rape, beatings, starvation and punishment—she is covered in snakes and sewage. Her torments may seem alien to some readers, at least partly due to inadequate contextualization of Cambodia’s historical moment (the immediate aftermath of genocide). It’s therefore useful that the next story is Minh Dang’s in 1990s California; her parents force her into prostitution when she’s only 10. Her story seems otherwise so commonplace American (she plays soccer, gets A’s in school, and is expected to attend and graduate from college) that the overlap between her experiences and Somaly’s seems that much more horrific. The final biography is of Maria Suarez, a Mexican immigrant who’s kidnapped, forced into a sexual relationship with an older man, arrested after his death, imprisoned for two decades and nearly deported on her eventual release. The girls’ stories could be too devastating to read save for each tale’s conclusion, detailing the efforts these women have made to rescue girls and eliminate childhood slavery. Minh Dang is upset when people speak of her as an inhumanly brave heroine; the focus here on activism after suffering may be enough to show the women as people, not victims.