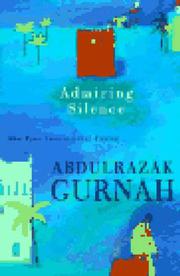 Gurnah (Paradise, 1994), born in Zanzibar, poignantly redefines the colonial experience as he details the ``disappointed love'' that an exile feels for both the colonial mother, England, and his now independent homeland. Suffering from heart disease and homesickness, the 40-year-old unnamed narrator decides to make his first return to the island of Zanzibar since fleeing it as a teenager when its new rulers, after obtaining independence from Britain, began a reign of terror. As a member of the Arab community made up of the descendants of merchants and slave traders who settled there centuries before, he had felt especially vulnerable. Once in England, he completed high school, went to college, became a teacher. He also met Emma Willoughby, brilliant, white, and determined to shock her pleasant, conventional parents. The narrator fell in love with her and wooed her with fictional tales of his past. He did the same with Emma's father, though in this case, rather than evoking the idyllic family existence in an African setting enjoyed by Emma, he tells stories that reflect the old Empire's benevolence. Since Emma disapproved of marriage, the two lived together, had a daughter, Amelia, and for years he was happy, though he never wrote to his family in Zanzibar or visited them. And now the island, he finds on his return, has become a place where the toilets are blocked, the sewers broken, and the stores empty. The government is marginally more benign than the one it replaced in a coup, but the leaders are corrupt, cynical, and unable to govern. Home seems no longer home, and when his family, angered about his relationship with Emma, turns on him, he goes back, his fables confounded, to England, another place that is no longer home—for by now, Emma has found another man. A beautifully calibrated story of a wrenching search for a home for the heart and soul in an age of immigrants and exiles.