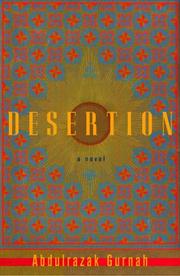 An initially unidentified narrator reveals events following the 1899 appearance of orientalist Martin Pearce in an unnamed village on Africa’s east coast, in what was then the Uganda Protectorate. Pearce (who had been robbed and beaten by his African guides) is taken in by Muslim “shopseller” Hassanali Zakariya. Later, having been rescued from his rescuer by fellow Englishman Frederick Turner (a district officer), when Pearce returns to thank Hassanali’s family, he falls in love with the shopseller’s beautiful sister Rehana. What happens next is withheld, pending lengthy chunks of historical and ethnographic background information—and the story leaps ahead to the early 1950s, as Gurnah (By the Sea, 2001, etc.) traces the fortunes of three siblings (in what was then Zanzibar): underachieving, virginal Farida and her brothers, Amin and Rashid (the latter, we gradually learn, has attempted to piece together the earlier story of Rehana and Pearce, whose relation to Rashid’s family will be even later revealed in a flurry of convoluted afterthoughts). The story does become more involving, as Gurnah details the bookish Rashid’s uneasy relationship with the confident Amin, Amin’s doomed love affair with a divorced woman (Jamila) who leads “a life of secrets and sins” and is involved in anticolonial political agitation, Farida’s own love for a man she cannot have—and Rashid’s departure to study in London (where he achieves second-class citizenship and learns “how to live with disregard”). But the complicated links joining Rehana, Pearce, Turner and Rashid’s family are themselves kept secret for so long that, while the opening chapters here take forever to build momentum, its concluding ones are hurried and overcrowded with last-minute explanations.

Probably a partially autobiographical story, but one that Gurnah has not fully shaped into a coherent narrative.