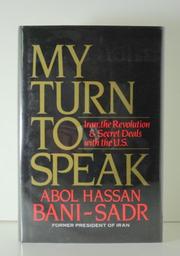 MY TURN TO SPEAK

Iran, the Revolution and Secret Deals with the U.S.

Bani-Sadr, president of the Islamic Republic of Iran during the American hostage crisis and the early stages of Iran's war with Iraq, offers an interesting-though frequently incredible and consistently self-serving-memoir of his brief tenure in office. The author portrays himself as the man who not only gave succor to the Ayatollah Khomeini during the years of exile in Iraq and Paris, but who was responsible for much of Khomeini's prominence during that period. But his account, Bani-Sadr is: a moderate who tried to foster democracy in Iran and resisted the authoritarian impulses of the fanatical Shiite clerics; an inspiring military leader who reformed the Shah's military and led the army to a stunning victory over Iraq in the first year of the war (only to be thwarted by mullahs who wanted the war to continue); and an incorruptible public official who, almost alone among Iranian leaders, resisted the wicked influences of the US and the Soviet Union. In the tradition of Persian intrigue, his story is replete with fantastic conspiracy theories, pronounced as incontrovertible fact. Among these are allegations of secret alliances between the Iranian clerics and American officials and an accusation that America surreptitiously started the Iran-Iraq war. Bani-Sadr adds that because of his resistance to Khomeini's attempts to perpetuate the power of the mullahs, he was forced from office and into exile in June 1981. As a historical document, this is a memoir of some importance, and Bani-Sadr's insights into the Machiavellian politics of revolutionary Iran are often absorbing. Nonetheless, frequent sensational accusations render his tale an eccentric, implausible commentary on the tragic folly of the Iranian Revolution.