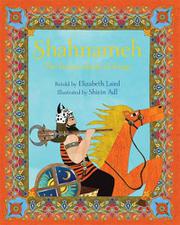 The Persian Book of Kings

In this adaptation of the Iranian epic, finished in the 11th century by Ferdowsi, the tragic tale of Rustam and Sohrab takes center stage.

The chronology of Persian kings at the beginning is difficult to follow, with many names to master and innumerable battle scenes, but as the great hero Rustam enters the story, events begin to slow down.  His exploits are described in detail. Years later, his son Sohrab, never having met his father, seeks him out on the battlefield. He is deceived by Rustam, who does not realize that Sohrab is his son. Sohrab’s death at the hands of his father, ignorant of the relationship, is emotionally engaging. Laird’s language is hyperbolic, as befits the description of mythological heroes, but it is always accessible, despite the occasional introduction of couplets reminiscent of the original poem. The illustrator uses elements of Persian miniatures in her naïve style, melding painting and collage. Handsomely produced with flowery borders on each page and intense color, the single- and double-page spreads are full of movement. Less successful are the smaller black-and-white vignettes, which are sometimes intertwined with the attractive borders. Lists of characters and museums with collections of Persian miniatures are included.

Although there are many stories omitted in this version, this is an excellent starting place to encounter the ancient heroes of Iran.