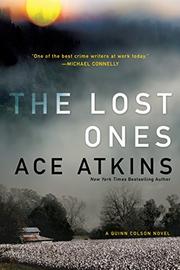 Atkins’ sequel to The Ranger (2011) finds Quinn Colson counting the ways in which his Afghanistan tours resemble life in the nice little Mississippi town that’s just elected him sheriff.

Begin with the complicated matter of identifying “friendlies.” What with turf wars and hidden agendas, not all law enforcement people march in lock step, Quinn discovers. Long legs, pretty red hair and an FBI power suit, for instance, do not, for sure, an ally make. They can signal one thing, then its opposite, and sometimes both simultaneously—mixed signals with the potential for dangerous, even deadly confusion. Along those same lines, an old pal with whom Quinn once happily tormented the juvenile authorities of Tibbehah County, Miss., now travels a crooked path to nowhere and can no longer be trusted. On the other hand, it’s a good bet that even Afghanistan might never be able to duplicate the homegrown nastiness of Johnny Stagg, the bottom feeder Quinn replaced as sheriff, and about whom the usually even-tempered, essence-of-cool Quinn is heard to say, “I’d like to punch Johnny Stagg in the throat.” Whether the business is dismal enough—and profitable enough—depends on ex-sheriff Stagg being somehow near the core of it. And suddenly Tibbehah County is rife with dismal profitable opportunities. There’s gunrunning activity involving bloodthirsty Mexican cartels, a thriving cottage industry in baby-selling, and more, all of which keeps Sheriff Quinn stepping briskly to keep up. Add to this a full familial plate: His wayward kid sister has unexpectedly returned. To reclaim the little boy she left in Quinn’s charge? Good, hard-to-answer question. So, with his own agenda piled high and spilling over every which way, it’s entirely possible that from time to time Quinn might ask himself if Afghanistan was…well…quite as singular as he’d thought.

A valiant hero to root for, a vividly rendered small-town setting, lots of expertly managed violence: another crowd-pleaser from a thriller-meister at the top of his game.