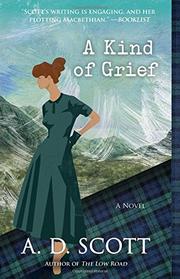 A KIND OF GRIEF

A woman’s feelings of guilt over the death of someone she admired enmesh her in a dangerous search for the truth.

Joanne Ross still suffers from low self-esteem caused by a bullying father, an abusive former husband, and a near-death experience at the hands of a colleague. Now married to John McAllister, editor of the Highland Gazette, she’s given up her job, but not her curiosity, to stay home with her two girls and work on a novel. In 1959, life in the Scottish Highlands remains old-fashioned in many ways, so Joanne’s not entirely surprised to read about a woman tried and acquitted for witchcraft. Determined to write an article about the woman, Alice Ramsay, she sets off for Sutherland. Alice is an artist in her late 40s, and though she tells Joanne that she doesn't want an article written about her, she kindly invites her into her house for tea. Joanne is enchanted by the ambiance of her cottage and the quality of Alice's artwork. Unfortunately, a colleague—the local art critic—cajoles Joanne into speaking unwisely. When he publishes a story about the witch trial, with details about Alice's house that only Joanne could have known, Alice is furious and refuses to speak to her again. Then Alice is found dead, an apparent suicide, though Joanne is convinced there’s more to the story. She and McAllister buy some of Alice’s paintings, sketches, and books at the auction of her property, a purchase that brings them afoul of one of Britain’s secret agencies, desperate to regain its reputation after the Burgess/Maclean case has made them a laughingstock. Although they’re threatened with the Official Secrets Act, McAllister, anxious to see Joanne become whole again, does not demur when she stubbornly insists on investigating Alice’s background and tries to find what the nameless secret agency is so desperate to hide.

Scott (The Low Road, 2014, etc.) skillfully uses the beauty of the Highlands as a backdrop for an entrancing mystery whose characters repeatedly and pleasurably upstage its action.