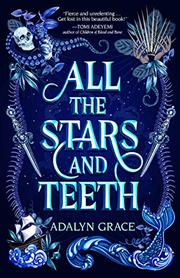 ALL THE STARS AND TEETH

From the All the Stars and Teeth series, volume 1

A princess embarks on a dangerous path to the throne.

In the island kingdom of Visidia, where each person is allowed just one type of magic, only the members of the royal Montara family have the ability to wield the dangerous soul magic. Princess Amora is next in line to be High Animancer, but she must first prove to her people that she is powerful enough to use her magic to protect them. But something goes terribly wrong during a critical public ceremony, and Amora runs away with dashing pirate Bastian, whose rescue comes with a price: She must help him recover his own magic, stolen away by a dangerous man leading a growing rebellion that could bring down the whole kingdom. Debut author Grace wields her own magic with a skillful balancing act between high-stakes adventure (here there be monsters, mermaids, and high-seas shenanigans), bloody fantasy, and character development in a story with a lovable found family at its core. Amora yearns for adventure just as she welcomes her right to command her kingdom; her ferocious sense of duty and legitimate need to do good shine through. The novel’s further unravelling of dark secrets long kept comes with a recognized need for accountability and making amends which adds a thoughtful extra layer to the rich worldbuilding. Amora has copper-brown skin and dark, curly hair; other characters have a range of skin tones in this diverse world.