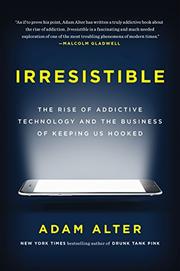 Alter (Marketing/NYU Stern School of Business; Drunk Tank Pink: And Other Unexpected Forces that Shape How We Think, Feel, and Behave, 2013) applies psychological insight and business acumen to his argument that compulsive usage of smartphones and social media is not peripheral but rather central to their engineering and lucrative, seductive qualities. “The environment and circumstance of the digital age are far more conducive to addiction than anything humans have experienced in our history,” he writes. Although he speaks to game designers and other innovators, he focuses on the tangled psychology behind “behavioral addiction” and nascent efforts to treat it—despite a lack of consensus on whether or how to do so. Alter first explores how behavioral addiction resembles substance abuse, although it is more widespread and thus often free of moral opprobrium. This amplifies its risk to professionals, who underestimate their time spent engrossed by a constantly expanding menu of technologies. Video games have ensnared a wide demographic, as well. Consider the immersive appeal of World of Warcraft, and even simplistic games like Farmville captivated the unsuspecting, due to having “a new [gaming] rhythm that fits into…people’s lives.” Similar patterns can be seen in the rise of “smartwatches” and ubiquitous email: “The same technology that [now] drives people to over-exercise also binds them to the workplace twenty-four hours a day.” The exhibitionistic nature of social-network apps enables a similarly insidious hidden hold on users, which Alter connects to Mark Zuckerberg’s insight that “people are endlessly driven to compare themselves to other people.” While such behavior might seem acceptable in adults, the author is alarmed by evidence that “screen time” is warping the mental and emotional development of younger generations. He bolsters such points with sociology and marketing studies, although more focus on the fast-changing technology industry itself would have firmed up his discussion.

A clearly written account of a widespread social malady that is sure to gain further attention in coming years.