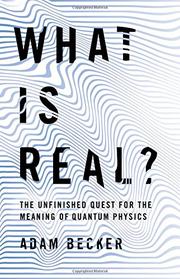 The Unfinished Quest for the Meaning of Quantum Physics

A historical exploration of quantum physics, which “predicts a stunning variety of phenomena to an extraordinary degree of accuracy.”

The realm of quantum physics is extremely difficult to comprehend. According to Niels Bohr’s “Copenhagen interpretation,” largely devised in the 1920s, subatomic particles have no definite properties until they are measured. One can only calculate the probability of a certain result—for example, the location of an electron—and the very act of measurement changes matters. In his first book, astrophysicist and science writer Becker agrees with a minority of physicists that quantum physics needs a better interpretation “because it’s not immediately clear what the theory is saying about the world. The mathematics of quantum physics is unfamiliar and abstruse, and the connection between the mathematics and the world we live in is hard to see.” Until his death, Einstein insisted that this bizarre picture couldn’t be correct, but most colleagues disagreed. Becker summarizes the debate and then takes up the cudgel. Einstein’s objections never caught on, but successors have had some success. David Bohm and Hugh Everett maintained that particles have specific properties and locations, but they also introduced complex concepts such as nonlocality, hidden variables, and a many-worlds view. The leading genius was John Bell, whose 1964 theorem postulates certain phenomena that violate traditional quantum theory. Subsequent extremely delicate experiments proved him right. Quantum physics works, so most physicists don’t concern themselves with its view of reality, and the debate rarely reaches popular media. It’s a philosophical question whose major figures are not household names and whose arguments do not simplify matters. The author works diligently to introduce them to a lay audience. Readers must put in the effort, but those who persist will come away with a taste of a basic scientific issue that a century of controversy has yet to resolve.

A useful introduction to the history of quantum theory for scientifically inclined readers.