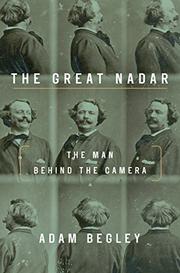 The Man Behind the Camera

A lively portrait of a photography pioneer who altered the cultural landscape of 19th-century France.

If readers in America know anything about Gaspard-Félix Tournachon (1820-1910), better known as Nadar, it's that he took some penetrating, iconic pictures of French celebrities—Victor Hugo, Balzac, Sarah Bernhardt, and George Sand among them—and perhaps also that he broke new ground in aerial photography by taking his camera and tripod aloft in a hot air balloon. As Begley (Updike, 2014, etc.) reveals in this entertaining biography, these facts hardly suggest the full range of Nadar's involvement in the haut monde of his day. He was also a cultural force, a one-man entertainment industry who spawned a host of imitators. In his early days, he was a young rebel. Along with close friends like the poet Charles Baudelaire and the tormented (and ultimately suicidal) writer Gérard de Nerval, he was a bohemian: young men of exhausted means who lived on the margins of society, borrowing from each other and running up debts. Nadar started his professional life as a writer of hopelessly corny moral tales. Never one to stay in the same place for long, he then became a widely known caricaturist who created a pen-and-ink pantheon of French society under the Second Republic of Louis-Napoleon. Barely did he make a name for himself before giving it up for photography, where he found his calling. He became a master of the new medium, adept at manipulating light and shade. He gained wealthy clients who liked seeing themselves immortalized in their finest clothes; he also helped create what we now know as celebrity culture. He also became rich enough to pursue new and sometimes insanely risky ideas involving flight as well as to fight endless legal battles with the brother who kept stealing his name.