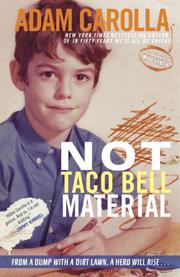 Former Man Show co-host and podcast phenomenon’s manly-man memoir about the awfulness of poverty and the crappiness of wealth and fame.

Carolla (In Fifty Years We’ll All Be Chicks, 2010, etc.) supplements his income as a famous podcast-show guy by doubling as a writer—or more specifically “ranter,” as in this latest autobiographical harangue. Warming to the author’s sense of humor depends on how you relate to a 47-year-old male who still calls women “chicks” and uses junior high scatological terminology like “ass mud.” Here Carolla takes vengeful aim at all the human beings who’ve pissed him off over the years, which seems to be pretty much everyone he’s come in contact with except his stepgrandfather. He rags on his over-the-top hippie parents for their un-American voluntary poverty and humorless activist causes; he rebelled against them in high school by becoming an obnoxious jock. His early 20s were full of crappy jobs and gonzo hijinks with buddies whose existences appeared to center around getting wasted and peeing on stuff. Carolla admits his love for lighting farts and recreational flatulence in general, gaseous coming-of-age hobbies that, not surprisingly, proved useful in his first gig as a host on Loveline in the mid-’90s. He got his big TV showbiz break when he met established comic Jimmy Kimmel and created the Man Show; next thing he knew, he was making serious dough and living in a house in the Hollywood Hills. The first half of the book showcases Carolla’s unrelenting bitching about all the manual-labor jobs he toiled in; the next chronicles his firsthand discovery that Hollywood success pretty much sucks too—except now he can pay his bills and doesn’t have to share his apartment with someone who isn’t a hot chick.

Another full-on blitz of 40-something white-male rage, lightened very little by the occasional potty-humor anecdote.