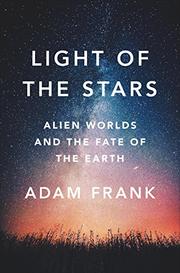 LIGHT OF THE STARS

Alien Worlds and the Fate of the Earth

An engaging effort “to tell a different story about ourselves and our fate among the stars and their many worlds.”

With the 21st-century discovery that planets circle most stars in our galaxy, books on alien life are pouring off the presses. In his latest, Frank (Astrophysics/Univ. of Rochester; About Time: Cosmology and Culture at the Twilight of the Big Bang, 2011), co-founder of NPR’s 13.7: Cosmos and Culture blog, focuses on its implication for earthly life, crafting one of the best introductions to the genre. Since ancient times, writers have speculated about alien civilizations, but a famous scientist once asked a disturbing question: Where are they? On billions of planets over billions of years, surely advanced societies exist. High school math proves that any civilization capable of building ships that travel at 10 percent the speed of light will colonize our galaxy in 650,000 years. With the odds that humans are unique approaching zero, Frank introduces an unsettling idea: Perhaps advanced societies develop routinely and then quickly self-destruct. All life extracts energy from the environment, which changes that environment, often for the worst. But nonhuman life works slowly. Primitive bacteria extracted energy and produced oxygen as a waste product. This eventually killed them, but it took a few billion years. Our technically advanced society became possible when we developed spectacularly great sources of energy. Fifty years ago, researchers worried about nuclear Armageddon, but worries about human-induced climate change and environmental destruction have taken priority. Plenty of species and human cultures—Easter Island, Maya, Norsemen on Greenland—have crashed after exhausting their resources. As Frank writes, we must “stop seeing civilizations like our own as standing apart from the world that gave them birth. All civilizations, including those that might occur on other worlds, are expressions of their planet’s evolutionary history.”

An intriguing account of the ongoing search for alien civilizations whose failure to appear may be a warning for humans to get their act together.