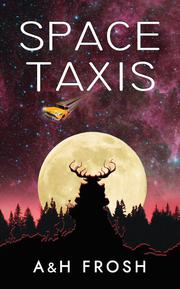 In A. Frosh and H. Frosh’s SF debut, a Brooklyn cab driver finds himself on an unfamiliar alien world.

It's 1977, and Mike Redolfo drives a taxi in a crime-ridden New York City. One night, after a strange passenger stiffs him, he’s summoned before his boss, Mallinson. It turns out that Mike has a tendency to rescue helpless people, which makes him a liability, so Mallinson arranges to have his hack license suspended.The now-jobless cabbie drives to the Fulton Ferry district to drink. Suddenly, a bright light appears, and Mike and his cab float into the air. He awakens on the planet Vost, where it’s revealed that he was taken from Earth because his DNA resembles that of a wanted “renegade.” This mistake has stranded him in the alien city of Catuvell. To get home, he’ll have to work for decades at one of the only jobs available: cab driving. He soon discovers that Catuvell, filled with flying vehicles, bizarre citizens, and soaring crime, isn’t too different from ’70s Brooklyn. In a parallel narrative in 1944 Prague, Marianna Kravová is a pregnant Jewish woman secretly living with Dominik Kominsky. When the Gestapo arrive, the pair escape with the help of resistance fighters; as they head to Budapest, Marianna sees that Dominik possesses a frightening hidden ability. The authors offer a tale that combines playful SF and harrowing historical fiction. Mike’s adventure on Vost is endlessly inventive, as when he upgrades his taxi in order to be able to maneuver in the incredibly congested traffic. Comments on present-day life abound, as in the line, “With driverless technology, the government can easily snoop on exactly where everyone is going.” World War II buffs will be fascinated by Heinrich Himmler’s presence in the story and his connection to other characters; the authors’ prose also shows an impressively dark streak as it satisfyingly portrays the infamous Nazi’s death. Although the plot sometimes feels conceptually crowded—the Celtic god Cernunnos appears at one point—it’s a chaos that’s endearing, and it leads to a joyous finale.

A smart, lively genre mashup that confronts past horrors and explores future heroics.