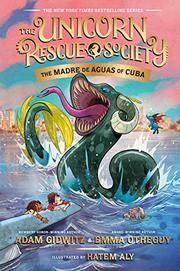 THE MADRE DE AGUAS OF CUBA

The Unicorn Rescue Society investigates the disappearance of a Cuban sea serpent.

In the fifth series installment, returning protagonists Uchenna and Elliot are in school, learning about water, when Professor Fauna calls them away. As the kids board the professor’s rickety single-propeller plane, they learn where exactly they are heading: Cuba. The island is in the middle of a massive drought, and Professor Fauna has reason to believe that the Madres de aguas (the Mother of Waters) has gone missing. It’s up to the society to find the sea serpent before any more damage is done to the people and wildlife of Cuba. As they set out on their mission of derring-do, they realize that once again they are up against their nemeses, the Schmoke Brothers. Via Yoenis, their Cuban American society liaison, Uchenna, Elliot, and readers learn about the political and economic hardships experienced by the people of Cuba, the island’s lack of basic goods and necessities, and Cuba’s need for real democracy (although the current role of the military is elided). This is conveyed within a quick, fast-paced read that’s ideal for kids who want a straightforward magical adventure. Uchenna is Nigerian, Elliot is white and Jewish, and Professor Fauna is Peruvian.

Series fans will enjoy revisiting familiar characters and exploring the island of Cuba with them.