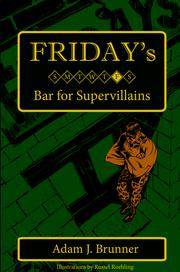 Brunner’s debut is a collection of interlinked stories revolving around patrons and employees of a bar catering to supervillains.

After a day of lawbreaking and battling superheroes, many of the villains of Titan City head to Friday’s Bar. It’s a sometimes rowdy place for villains to unwind, which is why owner/bartender JJ (ex-villain Joe Friday) doesn’t allow superheroes inside. Whip-smart waitress Georgia and likable, simple-minded bouncer Edward are also former villains whose pasts occasionally surface. Georgia’s powerful, recently imprisoned ex shows up unexpectedly in “Theories of General Relativity,” and Edward gets an unwanted reunion with his old crime boss’s son in “Along Came a Painter.” Friday’s fresh hire, Gil, however, aspires to be the villainous Seaguller despite JJ’s attempts to talk some sense into him. Other stories feature a relatively unknown superhero who manages to gain access to the bar as well as a reporter looking for a scoop. A supervillain known as the Mandroid, who recurs throughout, headlines the hilarious “Poker Night,” in which his subpar poker skills disguise a secret agenda. Brunner’s collected tales are generally lighthearted, particularly in their depictions of vibrant villainous characters like Friar Freeze and Quiz Master (who speaks only in rhymes). JJ and his employees narrate most of the stories in this book, which has a welcome variety of villains, not merely in their abilities but in their personalities: Some are vicious while others are seemingly hapless. Notwithstanding its humor, the book’s more sincere moments are its most memorable. JJ, for example, reminisces about his lost love and villainous cohort, Charly, in “One of Those Days.” The bar owner, similarly, acts as a mentor to Gil, which is a theme until the end. With that in mind, readers may best enjoy the collection by reading the stories chronologically. Meanwhile, Roehling’s (Wasteland Vol. 8, 2013, etc.) masterful artwork complements the book’s sharp characterizations. The illustrator’s heavy use of shadows makes for a dingy Friday’s but also spotlights the patrons, whose outfits, body shapes, and even facial expressions are discernible and distinctive.