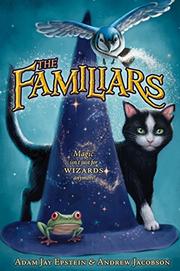 The calculated invocation of too many tropes makes for a joyless fantasy debut. Aldwyn may be an orphaned alley cat with a mysterious past, but he has street smarts in abundance, so when young wizard-in-training Jack adopts him as his "familiar," Aldwyn knows he's on to a good thing. To secure his position among the other familiars—Skylar, the know-it-all bluejay, and Gilbert, the goofily genial tree frog—he pretends to possess magic as well. But when the three apprentice wizards are kidnapped by an evil sorceress, Aldwyn's lie puts their already-impossible rescue mission in danger. There isn't a fantasy cliché left out of this tale nor anything particularly clever or original in their use. The familiars might as well have been named Harry, Hermione and Ron, with only the barest nod to nonhuman traits; the magical system is painfully muddled; the plot is driven by random encounters and ridiculous coincidences; the climactic Big Reveal is telegraphed far in advance; the denouement serves only as a blatant advertisement for a sequel. Pass. (Fantasy. 8-12)