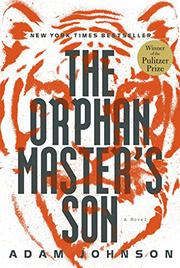 Note to self: Do not schedule a vacation in North Korea, at least not without an escape plan.

The protagonist of Johnson’s (Parasites Like Us, 2003, etc.) darkly satisfying if somewhat self-indulgent novel is Pak Jun Do, the conflicted son of a singer. He knows no more, for “That was all Jun Do’s father, the Orphan Master, would say about her.” The Orphan Master runs an orphanage, but David Copperfield this ain’t: Jun Do may have been the only non-orphan in the place, but that doesn’t keep his father, a man of influence, from mistreating him as merrily as if he weren’t one of his own flesh and blood. For this is the land of Kim Jong Il, the unhappy Potemkin Village land of North Korea, where even Josef Stalin would have looked around and thought the whole business excessive. Johnson’s tale hits the ground running, and fast: Jun Do is recruited into a unit that specializes in kidnapping Koreans, and even non-Koreans, living outside the magic kingdom: doctors, film directors, even the Dear Leader’s personal sushi chef. “There was a Japanese man. He took his dog for a walk. And then he was nowhere. For the people who knew him, he’d forever be nowhere.” So ponders Jun Do, who, specializing in crossing the waters to Japan, sneaking out of tunnels and otherwise working his ghostlike wonders, rises up quickly in the state apparatus, only to fall after a bungled diplomatic trip to the United States. Johnson sets off in the land of John le Carré, but by the time Jun Do lands in Texas we’re in a Pynchonesque territory of impossibilities, and by the time he’s in the pokey we’re in a subplot worthy of Akutagawa. Suffice it to say that Jun Do switches identities, at which point thriller becomes picaresque satire and rifles through a few other genres, shifting narrators, losing and regaining focus and point of view. The reader will have to grant the author room to accommodate the show-offishness, which seems to say, with the rest of the book, that in a world run by a Munchkin overlord like Kim, nothing can be too surreal. Indeed, once Fearless Leader speaks, he’s a model of weird clarity: “But let’s speak of our shared status as nuclear nations another time. Now let’s have some blues.”

Ambitious and very well written, despite the occasional overreach. When it’s made into a film, bet that Kim Jong Il will want to score an early bootleg.