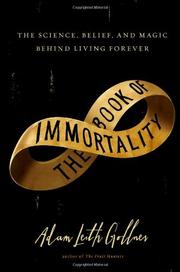 THE BOOK OF IMMORTALITY

The Science, Belief, and Magic Behind Living Forever

Former Vice editor Gollner (The Fruit Hunters: A Story of Nature, Adventure, Commerce and Obsession, 2008) may have felt he would need to achieve immortality in order to write this comprehensive, busy book, which bulges with the results of his reading, interviewing and traveling.

By the time his many journeys ended (he notes that he took quite a few he did not write about), the author had settled on the ideas that living forever is/will be impossible and that science is just another name for a belief system. After his introductory comments (that feature the puissance of a particular dream), he examines formal belief systems about immortality—conventional religions and otherwise. He notes the importance of water in many belief systems—“a symbol of all we don’t know.” The most intriguing sections concern Gollner’s connections with illusionist David Copperfield, who has claimed to have found a fountain of youth in the Bahamas. The author visited Copperfield’s islands, and much enjoyed the amenities, but was unable to convince the magician to show him the site—ongoing research, said Copperfield. Throughout these sections, the author also summarizes the role of youth-producing waters in mythology and legend. He then turns to scientific research and discovery in human aging and notes that cells simply cannot live forever, so science holds out no realistic ultimate hope for lives much extended. He also examines some Southern California daffy thinking and visits one of the storage sites for frozen corpses. (Yes, the separate head and torso of Hall of Fame baseball player Ted Williams are waiting for later thawing.) Gollner ends with Buddhism and some words about the “life force.”

An entertaining, well-researched account of the quest that brims with our fond hopes, foolishness and even desperation.