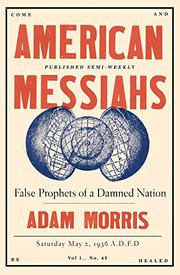 False Prophets of a Damned Nation

On Nov. 18, 1978, more than 900 people died at Jonestown, Guyana, a remote settlement of the Peoples Temple cult led by self-styled messiah Jim Jones. This mass murder-suicide, the largest single loss of American civilian life in a deliberate act until 9/11, serves as a gruesome denouement in this new study, in which independent scholar Morris analyzes a largely forgotten chapter in American history. From Jones to Mother Ann Lee to “Walla Walla Jesus,” charismatic would-be prophets have established quasi-communist settlements as correctives to the racism, misogyny, rampant individualism, and capitalist greed they believed have characterized American society. To further foster this defiance of mainstream America, most of the communities also shared an aversion to the nuclear family, with celibacy frequently promoted “as a rejection of marriage, childbearing, and traditional kinship structures.” Morris is at his best when he discusses the man who arguably embodied these tenets more than anyone else: Father Divine (c. 1876-1965), a black spiritual leader and civil rights advocate. Father Divine was an important and influential figure in his day, yet his controversial views on family—followers were expected to change their names and leave behind wives, husbands, and children once they joined his movement—ensured his virtual erasure from the nation’s collective memory. Unfortunately, the rest of the chapters are somewhat dry, scholarly, and jargon-laden. Moreover, the brevity of many of the chapters impedes the narrative flow, and the brief epilogue would benefit from more information on post-Jonestown cults (David Koresh and the Branch Davidians receive only one paragraph). Ultimately, the book should serve as a useful reference for students of messianic movements and the history of American religion in general, but nonscholarly readers may lose interest at some point in the narrative.

An informative and occasionally enlightening survey of American messianic movements, but it will likely have limited appeal among general readers.