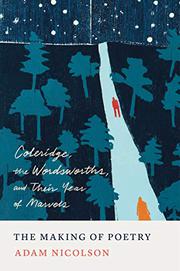 THE MAKING OF POETRY

Coleridge, the Wordsworths, and Their Year of Marvels

A full-immersion exploration of two great poets at the end of the 18th century, a time that ended with the publication of their Lyrical Ballads.

In his latest, Somerset Maugham Award winner Nicolson (The Seabird's Cry: The Lives and Loves of the Planet's Great Ocean Voyagers, 2018, etc.) provides an astonishingly rich re-creation of the months that the Wordsworths and Coleridges lived near each other in southwest England. The author tells us how they met, how they ended up living there, and how they spent their hours and days (lots of walking and talking) when both of them would write some of their most celebrated works—Coleridge: “Kubla Khan” and “Cristabel”; Wordsworth: “Tintern Abbey.” Nicolson also reminds us continually of the women in the writers’ lives: Wordsworth’s sister, Dorothy, a crucial companion who suggested ideas; Coleridge’s wife, Sara, who wasn’t as much a part of the literary excitement. We also see the emerging—and then diverging—poetical attitudes of the two principals and their eventual separation. Nicolson, like Richard Holmes—to whom he pays tribute early in the volume—not only read the works of Wordsworth and Coleridge and conducted library research; he moved to the region and enjoyed the same nature walks, becoming extremely familiar with the woods and water. Periodically, he offers his own lyrical paragraphs about the terrain—about what it was like in 1797 and what it’s like now. This reflects the author’s deep commitment to the project and diligence in trying to truly understand these men and their writing. He also quotes and expatiates upon hundreds of lines of poetry, dives into their letters, and tells stories about some of their notable visitors (young William Hazlitt was smitten by Coleridge). Nicolson’s passion sometimes leads him to suggest that all of this has been consequential for how we think and imagine today.

A stunning example of a happy marriage between fecund imagination and devoted scholarship.