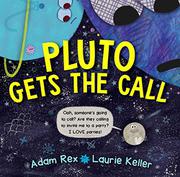 PLUTO GETS THE CALL

Heart (-shaped surface feature) literally broken by its demotion from planet status, Pluto glumly conducts readers on a tour of the solar system.

You’d be bummed, too. Angrily rejecting the suggestions of “mean scientists” from Earth that “ice dwarf” or “plutoid” might serve as well (“Would you like to be called humanoid?”), Pluto drifts out of the Kuiper Belt to lead readers past the so-called “real” planets in succession. All sport faces with googly eyes in Keller’s bright illustrations, and distinct personalities, too—but also actual physical characteristics (“Neptune is pretty icy. And gassy. I’m not being mean, he just is”) that are supplemented by pages of “fun facts” at the end. Having fended off Saturn’s flirtation, endured Jupiter’s stormy reception (“Keep OFF THE GAS!”) and relentless mockery from the asteroids, and given Earth the cold shoulder, Pluto at last takes the sympathetic suggestion of Venus and Mercury to talk to the Sun. “She’s pretty bright.” A (what else?) warm welcome, plus our local star’s comforting reminders that every celestial body is unique (though “people talk about Uranus for reasons I don’t really want to get into”), and anyway, scientists are still arguing the matter because that’s what “science” is all about, mend Pluto’s heart at last: “Whatever I’m called, I’ll always be PLUTO!”

Hurray for the underdog.