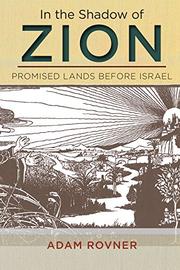 IN THE SHADOW OF ZION

Travel down some of the lesser-known roads to Jerusalem with an expert guide.

Few books that claim the power to radically change the reader’s worldview deliver on that promise. This informed investigation of several unexplored avenues of Jewish history actually does it. By examining six seldom-discussed attempts to settle a Jewish state outside of Israel, Rovner (English and Jewish Literature/Univ. of Denver) shows how the world might have looked had any of these plans come to fruition. Had the Jewish homeland developed in Angola, Suriname or Grand Island, New York—all considered candidates at one time—how might Jewish history, and world history, have turned out differently? The author meticulously follows in the footsteps of the visionary authors, rabbis and politicians who led hopeful expeditions to far-flung corners of the globe on just such a quest. Rovner writes clearly and precisely, providing a solid historical and geographical context, which he intersperses with personal narratives from his own travels that offer more intimate looks at the landscape and cultures of these countries. Scholars familiar with Jewish history will appreciate the author’s impressive scholarship, while mainstream readers could easily become overwhelmed by a text that is supported by nearly 100 pages of notes and bibliographical references. Similarly, a newcomer to the topic might not make the leap from religious Zionism to geographic territorialism as quickly as Rovner does. Unremarkable landscape photographs sprinkled throughout the book are perhaps an attempt to draw in more casual readers, but their generic vistas seem at odds with the detailed academic character of the writing. Nonetheless, for those interested in Jewish history, Rovner provides ample evidence for his thought-provoking argument that one success among these varied visions might have changed global geography forever.

A conceptually challenging intellectual history of the global search for a Jewish homeland.