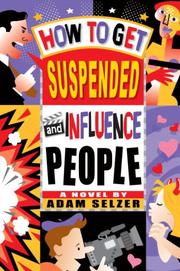 HOW TO GET SUSPENDED AND INFLUENCE PEOPLE

Eighth-grader Leon Noside Harris is in the “gifted pool” at school. None of the students like their overbearing teacher, Mrs. Smollet; she seems to want to run the school and their lives, but thinks the gifted will be enriched by doing nonstop crossword puzzles. When given the chance to make an instructional short feature for younger students in Mr. Streich’s Advanced Studies class, Leon decides to make a sex-ed documentary, letting kids know that thinking about sex is normal. Mrs. Smollet finds out and gets Leon suspended for “morals violations.” His friends leak the story to the other students, and Leon becomes a folk hero with great results. In his debut, Selzer manages to capture the voice of a smarter-than-average young teen as he humorously observes his parents, the teachers and his classmates. Pervasive strong language and subject matter bump up the target audience, but there’s definite appeal in the “kid-wins-over-teacher” plot and some real laughs along the way to victory. (Fiction. 13-15)