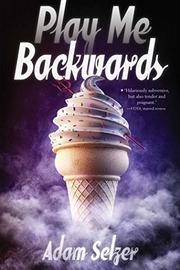 In his final year of high school, Leon must choose between maintaining his comfortable existence or blowing it all up to chase something greater.

Leon is on track to do nothing extraordinary with his life. He works at the local ice cream shop alongside his best friend, Stan, and hangs out with the screwballs and weirdos that come in. The gang shuns such bourgeois drudgery as the SATs and college applications in favor of typical teenage tomfoolery, but there’s a fine line between a smart, bored kid and a burnout. Leon is the former. When a few moments of chance bring him and popular girl Paige together, Leon begins to shake out of his slacker stupor. This is a particularly smart and sweet teenage love story, refusing to rely on burning passion or overwrought sentiment. There’s an emotional maturity in the way Selzer draws Leon and Paige’s courtship. It is by far the best part of the book. Less engaging are the peripheral characters, particularly Stan, a kid who believes that he’s the devil himself. The character and his influence on the story just don’t work, and time spent with him feels wasted when it could be spent elsewhere. Leon’s journey to personal responsibility is another topic well-tackled, making this an engaging, character-driven piece with several pros that mightily outweigh the cons.