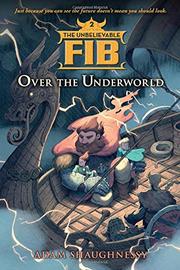 From the Unbelievable FIB series, volume 2

A year after Pru and ABE, both white in cover art, helped avert disaster, the two are preparing for seventh grade while keeping a hopeful eye out for Mr. Fox, who heads the Fantasy Investigation Bureau. When Mr. Fox finally reappears, the stakes are high: Baldur’s death is the first in a fateful series of events leading to Ragnarok, the end of the world. Trickster Loki appears to be the killer, but Mr. Fox cautions that belief and certainty blind people to magic and that assumptions are “beliefs in different clothes.” This theme’s also explored back in Middleton, Connecticut, where ABE’s father oversimplifies his son’s complex reality and a teacher pigeonholes Pru as a troublemaker. While some readers may connect with ABE’s and Pru’s middle school troubles, many will feel like flipping forward to their more suspenseful adventures in the shadowy underworld, encountering Hel, the clever Queen of the Dead. Readers who skip series opener The Trickster’s Tale (originally published as The Entirely True Story of the Unbelievable Fib, 2015) may find themselves immersed in a Viking world they don’t fully understand.

While the story’s typical middle school troubles may drag, readers excited by plot twists and riddles will enjoy this book’s mythical whodunit and anticipate future resolutions to its cliffhangers