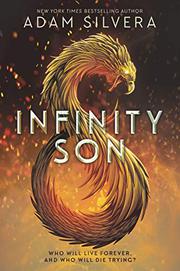 From the Infinity Cycle series, volume 1

Magic goes viral in Silvera’s (contributor: Color Outside the Lines, 2019, etc.) fantasy debut. But can it win a war?

For brothers Brighton and Emil, their 18th birthday is “off to a rough start.” The two dream of being celestials (people with magic abilities) but are reminded yet again that they’re “painfully ordinary.” Or are they? When potions dealers attack the brothers, Emil discovers that he has phoenix fire within. Brighton uploads a video of the fight online, propelling Emil—whom the celestial-obsessed dub “Fire-Wing”—to superstardom. The brothers find themselves caught in the crossfire between the heroic Spell Walkers, who fight for the end of celestial persecution, and the power-hungry Blood Casters, who gain magic by stealing it from creatures. With its raw, complex characters, Silvera’s latest packs his signature high-stakes emotionalism alongside a politically charged premise. The alternate New York City setting mixes current tech (e.g., virtual reality and Instagram) with magical tech (e.g., wands and gem-grenades) to create a richly contemporary urban landscape. Though Silvera mostly switches between Emil’s and Brighton’s strong, first person, present-tense narration, the perspectives of a Spell Walker and a Blood Caster are also magnified. The cast primarily consists of people of color, several of whom are also queer (including Emil, who is gay).

A bright spark of a promising series.