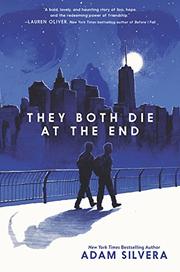 THEY BOTH DIE AT THE END

What would you do with one day left to live?

In an alternate present, a company named Death-Cast calls Deckers—people who will die within the coming day—to inform them of their impending deaths, though not how they will happen. The End Day call comes for two teenagers living in New York City: Puerto Rican Mateo and bisexual Cuban-American foster kid Rufus. Rufus needs company after a violent act puts cops on his tail and lands his friends in jail; Mateo wants someone to push him past his comfort zone after a lifetime of playing it safe. The two meet through Last Friend, an app that connects lonely Deckers (one of many ways in which Death-Cast influences social media). Mateo and Rufus set out to seize the day together in their final hours, during which their deepening friendship blossoms into something more. Present-tense chapters, short and time-stamped, primarily feature the protagonists’ distinctive first-person narrations. Fleeting third-person chapters give windows into the lives of other characters they encounter, underscoring how even a tiny action can change the course of someone else’s life. It’s another standout from Silvera (History Is All You Left Me, 2017, etc.), who here grapples gracefully with heavy questions about death and the meaning of a life well-lived.

Engrossing, contemplative, and as heart-wrenching as the title promises.