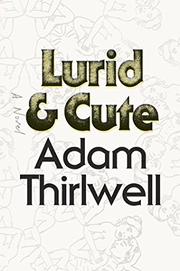 In a pallid sort of noir, a boy-man lurches through an aimless series of small adventures and stumbles into criminal behavior that eventually exacts its comeuppance.

Thirlwell (The Escape, 2010, etc.) starts this trying novel with a strong episode and a real sense of foreboding. His hero wakes up in a hotel with memory gaps and a friend named Romy, whose bloody, comatose state requires some quasi-comedic devices to get her to a hospital. That his sweet wife, Candy, accepts a ludicrous explanation for his overnight absence and bloody T-shirt when he returns home reflects not her credulity but the cosseting she thinks his semidepressive state requires. A spoiled only child, he’s in his early 30s, has quit working, has spent time in therapy and lives with Candy in his parents’ home. He attends parties and ponders his relationship with Romy, a line of thought that gets gnarly when one party turns into an orgy and one polymorphous grouping entails him, Candy and Romy. He drifts into crime, and the book’s noirish side grows darker. Throughout, he indulges in an endless diet of recreational drugs—“these increasing narcotic entertainments did make the way I thought perhaps a little blurred.” And there's the main problem: the squishy, doped-up, self-indulgent slacker-hipster voice and thinking of this first-person narrative is so well-rendered and so tiresome. Even if Thirlwell captures a type and time, was this a trophy worth aiming for? It calls for a tweak of Samuel Johnson’s dated line on a woman preaching and a dog walking on its hind legs: It is done well, but one is still surprised to find it done at all.

Recent years have brought drug-drenched efforts from well-established artists Pynchon and Lethem. Perhaps the kindest thing one can say is that the talented Thirlwell has gotten his literary substance abuse out of his system at an earlier age.