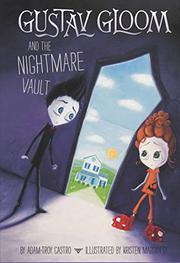 GUSTAV GLOOM AND THE NIGHTMARE VAULT

From the Gustav Gloom series, volume 2

In a sequel that cycles around the same track as the opener, Castro sheds light on the past and nature of the aptly named Gloom mansion and the saturnine lad who lives there alone with armies of animate shadows.

Just as in Gustav Gloom and the People Taker (2012), Fernie What, recently moved into the house across the street, joins her new friend Gustav in a long flight through the eerie mansion’s seemingly endless halls and rooms. They are pursued this time by October, a relentless shadow- (and people-) eating creature disguised as a decrepit ice-cream man (spooky!) who is after the hidden, ominously named Nightmare Vault. Despite quick visits to a Gallery of the Almost Famous, a prison for evil shadows and like quirky locales, the chase turns tedious as the children pass through dozens of doorways and up or down more dozens of flights of stairs on the way to a climactic, predictably resolved face-off. Along the way, between moments of contrived melodrama, Gustav drops needlessly strung-out revelations that explain the house’s origins, his lack of parents and other mysteries.

A die-cut cover scene and Margiotta’s chapter-head views of huge-eyed gamins posing in canted settings add to the pervasive air of strangeness, but it’s still a slog.